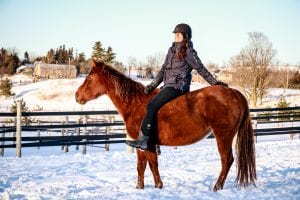 Use: In training with Lindsey

What’s Interesting: Peanut was given to Lindsey as a project horse from down the road. Peanuts dam is Azooma.

Peanut would kick out and dominante in the field  (not with other horses but with people) that it was making it difficult for them to care for her. They made the tough decision to either put Peanut down or give her to Lindsey. Lindsey took her on as a project to train for extreme cowboy racing.

You can watch Lindsey starting Peanut from scratch by checking out the online course.

Lindsey started Peanut under saddle in December 2017 and started training with obstacles and taking Peanut to events starting in 2018.

Peanut competed in Pro for Extreme Cowboy racing in 2018 even though she was just started under saddle in December 2017. She finished 7th overall for the year despite missing one show and by the end of the season was finishing in the top 5.

Peanut also competed in Extreme Cowboy with 12 yr old Adam in Young Guns at Adam’s first show ever and won 1st place! She also competed with Emily at her first extreme cowboy show and placed 5th in youth.