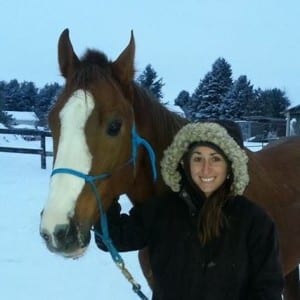 Use: For the TB makeover project

What’s Interesting: His birthday is Valentines, and by the time he came to Lindsey he had 8 owners and was only 7 years old.

What he likes: Rolling in the snow!

What Lindsey Says About Him: “This is one beautiful horse and I can’t wait to see what he can do – his life story is a bit of a sad one, so I am happy he is with us and can have a good life now.”

Information: Lindsey found Cupid on a Facebook group posted for sale as an off the track Thoroughbred (OTTB) that had just finished racing and was still at the track.

Lindsey was in search of a horse for the TB makeover contest (by the retired racehorse project to be held at Kentucky Horse Park end of October 2015). She fell in love with his adorable looks, and liked the description that said he was ‘quiet enough he could be used to jog at the race track, injury free and sound.’ Despite being in Ohio, Lindsey called to reserve him and paid for the export certificate/Coggins and made plans to drive down and get him.

The drive was interesting with a partial snow storm both ways over the February 7/8 weekend 2015 so what should have been a 14hr round trip was actually 21hrs.

When Lindsey first arrived to get Cupid, he was still at the Mohoning Race Track in Ohio. There are no paddocks or places for turnout, only several barns full of horses. They didn’t want to race him anymore so they said he had been in a stall with no exercise, turnout, or walking for the last 3-4 weeks. Lindsey took him outside to walk before trailering and he leaped into the air with all 4 feet off the ground twice. He was frisky but loaded really easily and was an excellent boy for the next 12 hours in the trailer.

When he finally arrived at PHH he was turned out in the round pen and surprisingly didn’t do more than trotting around with a bunch of rolling in the fresh white snow.

His first session was the next day where he started learning the Parelli 7 games. He is a quick learner and very smart. He progressed really quickly until ‘squeeze game’ which is the last game. This is the game where you send a horse over or between something. In this case Lindsey tried sending him over a raised pole. It took him about 15 min and he couldn’t believe he could actually cross a pole.

We also discovered he had no idea what an apple is, he doesn’t like our sugar free grain, he has what looks to be a broken tooth, and Lindsey is his 8th owner and he wasn’t quite 7yrs old yet when purhcased.

Lindsey originally bought him to be a hunter/jumper but it’s clear after 2 sessions that he needed a lot of confidence building going over poles. He just had no idea what to do with his feet over the little jumps.

On his first ride with Lindsey he was very slow and pokey and his canter was very calm. His second ride was equally relaxed and slow. He seemed surprised that we didn’t ask for too much and is getting much more connected to people each session. He is very calm to ride and definitely isn’t super ‘hot or frisky’ … he is pokey if anything.

Lindsey trained Cupid in obstacles and extreme cowboy racing over the summer 2015. He placed 5th in the obstacle challenge at both the Uxbridge Fair and Turkey Run Ranch against some tough competition. He then traveled to Kentucky Horse Park with Lindsey for the Retired Racehorse Project’s Thoroughbred Makeover where he won 2nd in Trail and 10th in freestyle.

After returning from the makeover, Lindsey made the tough decision to sell Cupid as a pleasure/trail horse. She made this decision because Cupid didn’t enjoy the show atmosphere, despite his connection to Lindsey he was always stressed at events so he would enjoy a home where pleasure/trail riding was the priority. PHH didn’t keep him as a lesson horse because most of our clients do some offsite shows and we just felt it would be better for Cupid to find one person to love him, spoil him, and let him retire from showing.