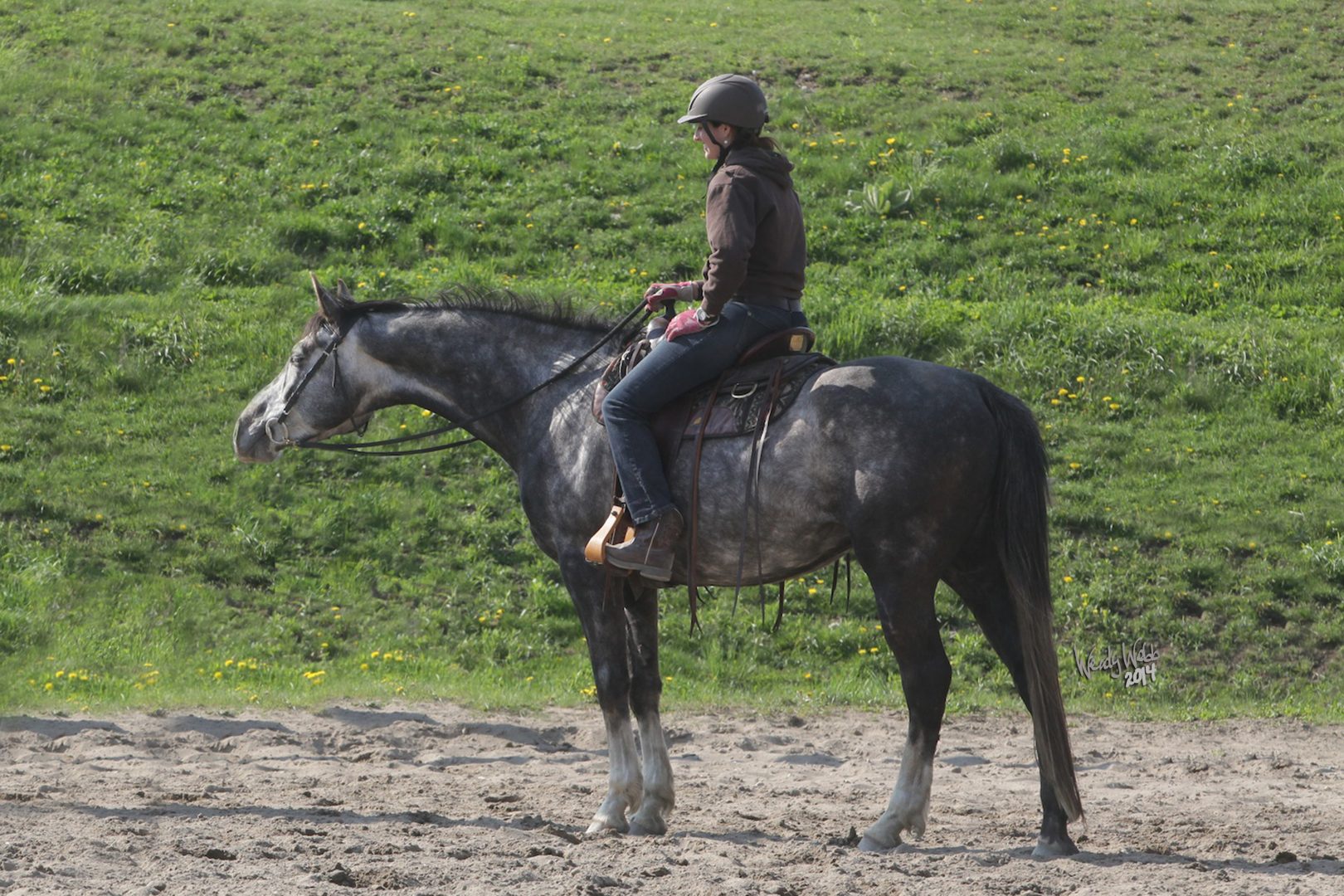 Use: He is Lindsey’s Parelli Levels horse

Parelli Level: He’s working in Level 4 for Online and Liberty… for freestyle he’s working on Level 2

What’s Interesting: At the age of 6 months he went in a parade!

What he likes: Playing – Balius has been known to play fetch with the dog, and toss hula hoops around. He is a very playful horse and loves to horse around.

Talents: Being a smart cookie – he’s ready to learn any trick

What Lindsey Says About Him: “Balius is a fun horse to work with – he challenges me to do my best because if I can be very subtle and sensitive he can pick up on the slightest cues and can try so hard. He is amazingly smart and learns new things easily, it’s really remarkable just how many tricks he knows and enjoys learning them!” 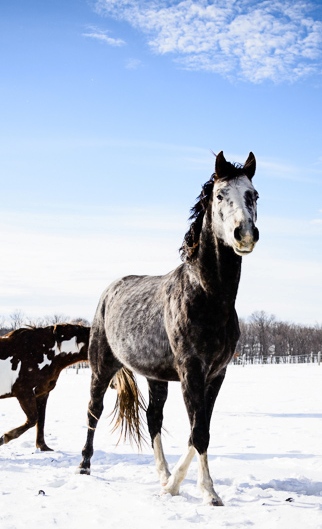 Information: Balius was born May 28, 2010 at Thistle Ridge Farm in Durham, Ontario out of a lovely mare named Come by Chance. His dad is Furest Grayheart – a fantastic stallion with excellent jumping bloodlines and a lovely temperament.

Balius came to Lindsey when he was just 4 months old. After Lindsey spent some time with him, she discovered that he is very trainable and very bombproof. Balius doesn’t care about anything spooky – tarps, the giant ball, atv’s, bikes, or anything else he really doesn’t get bothered by anything. Lindsey put a saddle on him when he was 1yrs old and he just glanced sideways at it, and then carried on grazing.
When he was just 6 months old he went to his first parade – the Uxbridge Santa Claus Parade! Dressed with reindeer antlers and bells he was led by Lindsey down the street. Families cheering, music blaring, and other floats around but he was calm as a cucumber and just walked the whole parade.

Lindsey hopes that he will be a brave jumper one day. Stay tuned for this upcoming star.

Lindsey started some training with Balius in fall of 2012 and has put him under saddle and rode him for the first time on October 25th, 2012! Then time became a bit of a barrier and Lindsey focused on some ground work, had him gelded in June of 2013 (after breeding him to 5 mares first), and then resumed some saddle training in fall of 2013. His training has been very on and off based on Lindsey’s schedule…. somehow she always ends up training other people’s horses and Balius gets put on the back burner, however this wasn’t really a bad thing because he’s been able to grow up with beautiful correct legs that haven’t been pushed too hard too fast. 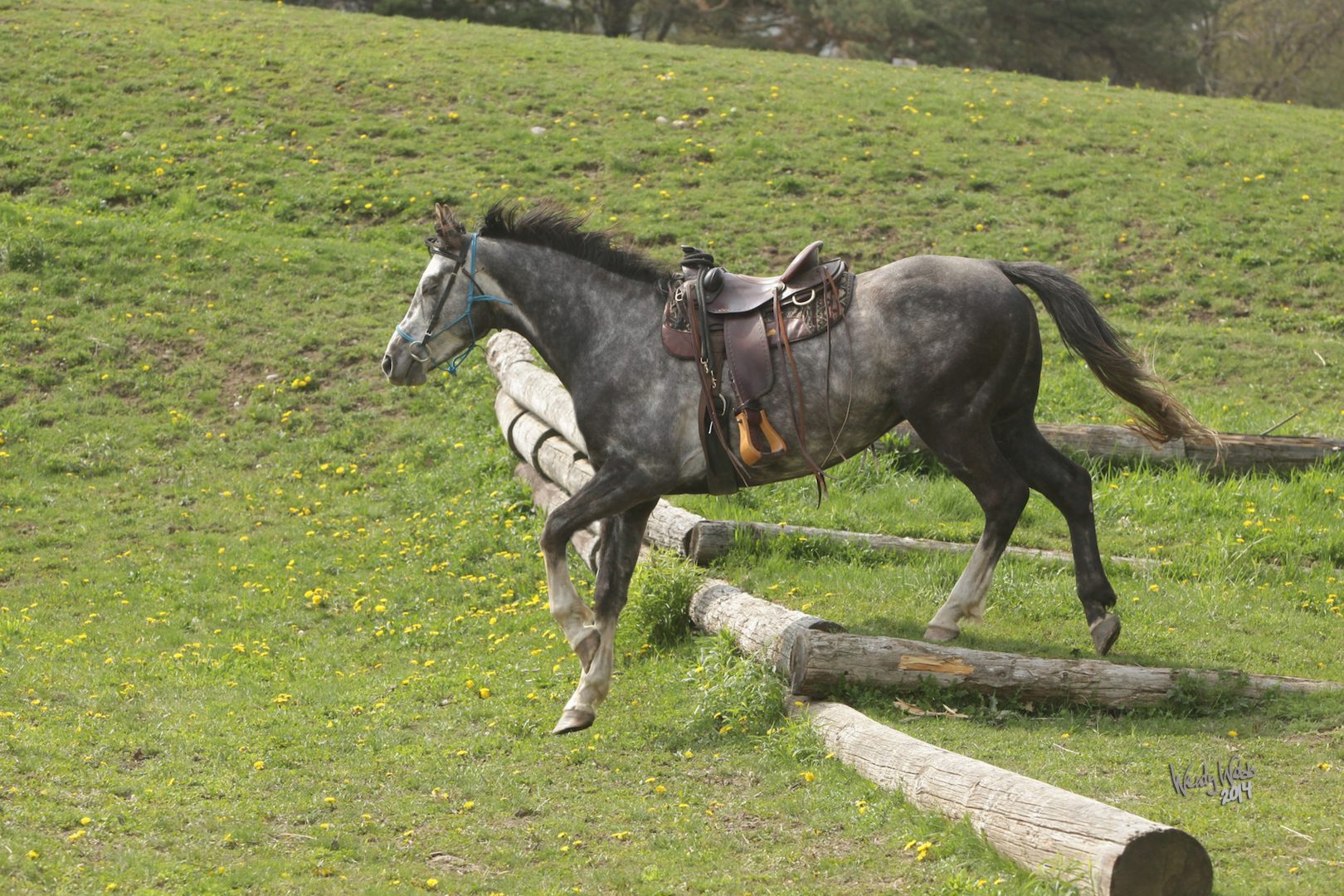 2014 started a new year with Lindsey committed to getting some miles under Balius’s belt now that he was 4 years old. She took him to his first clinic with Don Halladay Parelli Professional and played on all the obstacles and rode walk, trot and canter. Lindsey also took him to a few indoor arenas for some offsite exposure. He then was ridden by Lindsey out on many trail rides over the summer and he got to discover the fun of swimming.

He did his first show at the PHH Extreme Cowboy event where he placed very well and did a great job with the obstacles and crowd. He also participated in a group musical routine at the season finale horse show at PHH.

He is still very much a baby with a playful mind that likes to wander, and his confidence amazing on the ground but can still faulter in the saddle. He needs continued patience and positive miles in the saddle before he’ll be ready to show offsite but hopefully that will happen this year in 2015!